In general, death is not an exciting topic for conversation but it is the ultimate destination for every single living creature so it merits some attention.

The idea of an afterlife 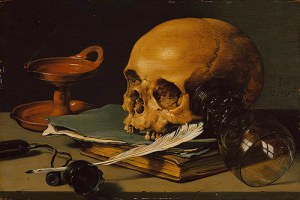 satisfies the human organism’s desire for continuity since the alternative, obliteration, is so difficult to comprehend. Nature imbues everything with a will to live, from the simplest bacteria to humankind. The continual drive to exist is what enables life to grow and evolve but it also contributes to the inability to imagine no life after death.

This chapter from The Demon’s Sermon on the Martial Arts entitled, Transformation of the Sparrow and the Butterfly, encapsulates my view or understanding of death. It somewhat ties in with the Hindu concept of the deshin, or life force, that exists in every person but somewhat as a third-party identity or energy that exists in our personas but then migrates on after biological death.

This is similar to Aristotle’s meditation on death by comparing it to the burning of wood. The wood burns and becomes ash. The smoke and heat rise up and disappear but, since energy in nature only changes but does not wink out of existence, they must go to some other place or time.

Existence, according to the dying man in the story of the sparrow and the butterfly, is dependent upon form. Form is what drives the various types of behaviors and thoughts and, when that form is destroyed, so too is the persona of that creature.Yet, the energy of that creature moves on to something new, forgetting what it once was; living in an eternal and universal present that goes beyond individual consciousness.

Going back to the Hindu concept of deshin, our life is a gift that we hold temporarily. It is our duty to make the most of it, to grow and develop it like an organism; simple or complex, striving to to be our best. Then we die our works embodied in that energy migrate on.

Is this empowering or is this so frightening that it stifles action? For me, it empowers because it frees me from consequence save for the consequence of wasting time and opportunity.